CAM-I uses the official european standard EN 13508-2:2003+A1:2011 as the letter coding to identify the observation, but this is only a configuration file, technically, any lettering system can be used, if desired.

By default, observations can only be added during recording and only after all the required fields for the strand have been filled in, but these features can be turned on/off in the General settings on the configuration page.

You can add a new observation in one of the following ways:

The observation will be added at the current video position and distance of the tractor. So if you are adding observations after recording, use one of the following techniques to select the insert position:

The application will also automatically add observation records at the appropriate time, such as at the start and end of the recording.

You can enter the observation code with the keyboard or select it with the mouse, either which way you prefer to work, you can always use the context sensitive drop down list or code-tree-selector popup to help you navigate through all the valid options.
If you click on the question mark or press 'enter', the dropdown list will show. To select a value from the list, click on it or press the corresponding letter(s) at the front of the menu item. 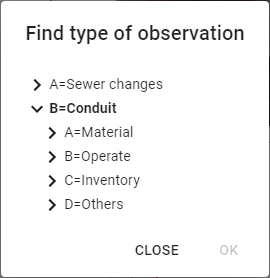 The code-tree-selector popup will open when you click on the magnification glass or when you press F3. You can select the code sequence by clicking on the tree items or by entering the corresponding letter(s). Notice that the underlying text box will also show your current selection.

If you have made a mistake while entering the code sequence, you can always remove the last letters with the backspace. This also works when the code-tree-selector popup is open. In that case you can also simply click on another tree structure and the code sequence will update accordingly.

If you don't correct a mistake that you entered with the keyboard and you end up with an invalid code sequence, the part that is incorrect will be shown in red and you wont be able to proceed with the rest of the sequence or any other details. By default, you also wont be able anymore to add any new observations for as long as the current has not been filled in completely, although you can also control this feature from the settings page, on the 'General' tab.

Once the code has been entered completely, the application will show the rest of the parameters that are required for the currently selected code. This can be:

When a value is required, this is indicated with an asterix (*) after the field title. If something is filled in wrong, like a text value instead of a number of a value that is out of range, than the field will be displayed in red after you have pressed on the 'ready' button.

To delete an observation, first expand it by clicking on the observation you want to remove. Once expanded, there will be a garbage can in the upper right corner. Use this to delete the observation. Note: before actually removing the observation, a dialog box will ask you to confirm the action.

Between both values is a toggle button that allows you to select if the values are: 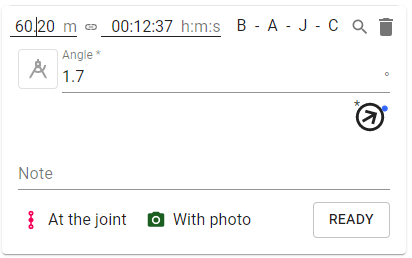 Some observations have a start and end point. CAM-I calls these continuous. They can be recognized by the presence of a led sign in the upper-right corner together with a number. When a continuous observation is complete, there are 2 entries in the observations list, both with the same number. The following table shows the meaning of the different states that the led can be in:

You can close a continuous observation by entering the same code as the starting point, but where the last letter is replaced with '1'. This observation can also be generated automatically by clicking on the green led. This will open a popup menu to ask for your intentions: 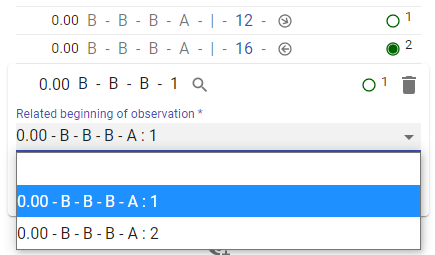 The system will present a dropdown menu with all the possible observations that can be closed when there are multiple possible starting points for a closure. The labels in the drop-down list contain the following values: